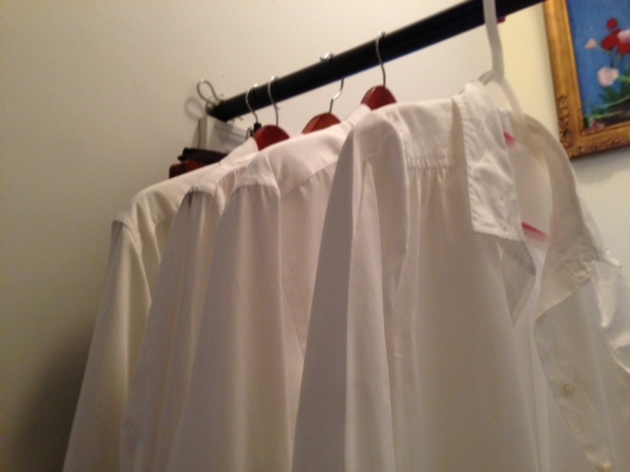 I was going to call this post laundry day, but once I started doing the ironing I decided to change it. I’ve been doing the laundry since the week I got suspended. Even though I am back at work, I had to take a pay cut, and being out of work for six weeks pretty much wiped out my checking account, so I continue to do the laundry. I have also had to start ironing, as my new job requires I wear a pressed white shirt.

I remember when I’d first done this job, about 11 years ago, I ironed the only white shirt I had at the time and my first day at the desk the handyman Rupert reported me to the super for having an un-ironed shirt. He was just being a prick, asserting himself in the pecking order. Shit rolls downhill, I like to tell my younger co-workers.

I myself don’t engage in that sort of thing, in the three years I was a handyman I never busted anybody’s chops unless they were really out of line. Perhaps that’s what they didn’t like about me, not enough of a prick.

Getting back to the laundry, it’s not something I love to do, like cooking; but it’s something that must be done, a chore, and if I can’t afford to pay someone to do it, I do it myself. When I was married to my first wife we would do laundry only when there was nothing clean left for us to wear, and that often took a month to achieve. Then we would stuff all of our clothes in the big laundry bag and roll our cart up Avenue A to the laundry on 7th Street.

When we moved to Greenpoint and had a kid, that all changed. I got used to doing laundry once a week, and we would always do it together. It was a laundry on Nassau Avenue, and the Cuban woman that owned it showed us how to properly fold and stack out clothing, because she noticed we were clueless.

After we divorced, it was back to doing it myself, but I had at least learned to do it every week and not wait till I ran out of clean clothing. When I met my new wife Danusia, she lived right above a laundry on Avenue B and it was easy to do it. Sometimes she did it, sometimes I did it, and sometimes we did it together.

But when I did it I was still throwing everything in together and washing it all in hot water, which led to some interesting color changes in some of our clothing. She wasn’t happy about that. My white shirts I sent to the cleaners at work, so I didn’t have to worry about running colors. A guy down the block ran a “Doorman special” that started out at a dollar a shirt and went up to $2.50 by the time I became a handyman and didn’t have to wear the white shirts anymore.

So I have come full circle, and though I still don’t love doing it, a derive a certain satisfaction from an accomplishment, I pack the clothes, take them down the block to the laundry, but instead of dropping them off to be done, as I’ve done for the past 6 or 7 years, I do it myself. I separate the whites from the colors, wash the colors in cold water, and when that’s done, I always remove the jeans and the things I want to iron before throwing the rest in the dryer. The jeans I hang to dry, the white shirts I starch and press while they are still damp, as they come out looking crisper than if you let them dry first. I don’t dry the jeans because they will not fade as fast and last longer if I don’t put them in the dryer. I had a friend that said you should never wash a pair of jeans, but I also remember the way he smelled. I think I’ll keep doing it they way I’m doing it, at least until things change again.

I like to write, take things apart and put them back together. Also our cat Snookie, turtles, and my lovely wife Danusia.
View all posts by xaviertrevino →
This entry was posted in Uncategorized and tagged change, chores, humor, jobs, laundry, relationships, work. Bookmark the permalink.

1 Response to Iron While Damp